Piodão: one of the most stunning historical villages of Portugal!

In Portugal, in the Portuguese region of Beira, there is a group of 12 historical villages (https://aldeiashistoricasdeportugal.com/en/): Piódão is for me one of the most beautiful ones! It is a very special and gorgeous place located in the foothill of the Açor Mountain, situated to the south of the Estrela Mountain where water springs, chestnut trees and oak trees, heather and broom are abundant.

It is not easy to have access to Piódão. The only option is to go by car and drive very carefully because the main streets are in good condition but have a lot of curves: so go slowly! If you land in Porto and rent a car that is definitely the best and most affordable solution. On the way to Piódão you can pass by and sleep in Viseu, for example /blog/viseu-and-the-gr%C3%A3o-vasco-museum-portugal-s-hidden-gems. When you arrive in Piódão you need to leave the car outside because cars are not allowed to circulate in the winding and narrow cobblestone streets of this village. But do not worry about it because there are many places to park the car and it is only a 5-minute walk from the parking lot to the village’s centre.

In my opinion if you go in August it can be very hot (sometimes it can reach 35ºC). I would go in the low season, in December or even in March, because it can be more pleasant. If you go on a weekend, for instance, like I did, even during the low season you will find a lot of Portuguese families. Therefore, to avoid the crowds (this amazing village is getting popular!) I recommend that you go on a business day. The weather is still good and you can hike the mountains – there are several hiking trails around Piódão. Of course that if you go in the summertime (July or August) you can enjoy the river beach of Foz da Égua, an even smaller mountain village located 20 minutes away by car.

Can you imagine how it was to live in such an isolated mountain village 100 years ago, far away from a big town like Coimbra? It is hard to believe but people throughout the centuries actually lived here. We can go back in time more than 2 thousand years when this region was occupied by the Lusitanos. The Lusitanos were an Iberian people that lived between Viseu, the Estrela Mountain and the Açor Mountain and resisted the Roman occupation of what was then Portugal. Throughout the centuries the people of Piódão adapted to this apparently inhospitable place and built their houses on slopes. At distance, especially at night, when the village gets all illuminated, the houses seem to be displayed like if it was a Nativity scene. It is a really unique view!

From 1960 onwards Portugal lost a great part of its population because many people immigrated to countries like France, Luxembourg, Germany or Canada. They were seeking for a better job and a better life. At the same time a lot of people from the interior of Portugal migrated to big cities such as Lisbon, Porto or Faro. Consequently, the interior of the country became deserted and with an ageing population. 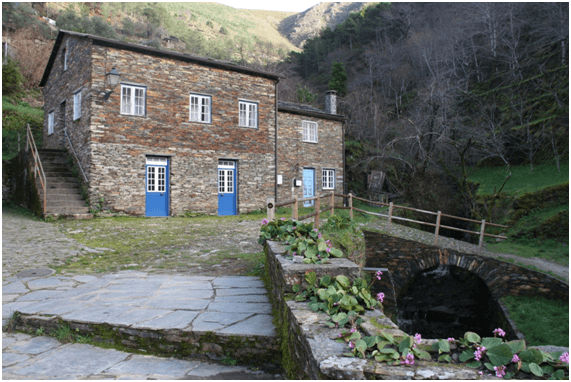 It is difficult to calculate how many people live permanently in this small village, which presently belongs to the Arganil council. According to the official numbers Piódão and its parish (composed of 10 other villages) have only 200 people. Nowadays, there are probably a lot of vacation homes. In the past Piódão’s inhabitants depended on sheep farming and apiculture. These activities are still important but presently tourism is becoming the main economic activity. In the last years Piódão became a touristic attraction. There are several old typical houses to rent to tourists in the village, with central heating and where you can comfortably spend 2 or 3 days. The Casa da Padaria, a former bakery that was transformed into a guest house, is one of them (http://casadapadaria.com/en/). If you prefer to stay in a Hotel, the 4-star Inatel Hotel is located outside Piódão: it is only a 10-minute walk to the village (https://hoteis.inatel.pt/en/Menu/Hotels-Accommodation/Mountain/Piodao/Inatel-Piodao.aspx). 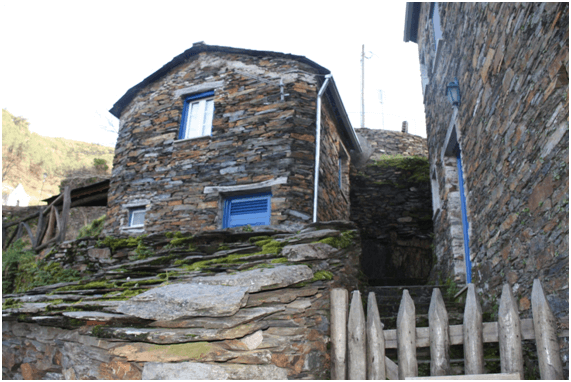 What to do in this fairy-tale village?

Explore the streets of Piódão

If you spend 2 or 3 nights in Piódão or if you simply pass there on the way to Coimbra, for example, I recommend that you explore on your own the narrow, steep and irregular paved streets of this ancient village. On your walk you will pass by several two-storey houses made of schist with blue painted doors and also by the old communal bread oven as well as by the Eira (the former threshing ground). Schist and shale are rocks that exist in large quantities in the Açor Mountain and they were used to build the houses and to pave the streets. It is very interesting to see the contrast between the blue painted doors and windows and the shale of the walls and of the roofs. In my view this, together with the wooden crosses above the doorways (that were used to protect the houses from evil spirits) gives a great architectural uniformity to Piódão! 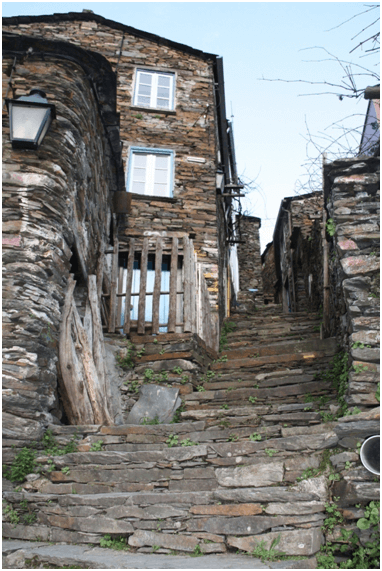 If you are coming from the Estrela Mountain or from Viseu, for example, stop in Piódão to do a picnic. I did that and I don’t regret it! There are some wooden tables and benches where you can enjoy a nice meal while you admire the water stream passing in front of you! The views are amazing: you are literally in the middle of nowhere and Nature surrounds you! Superb! 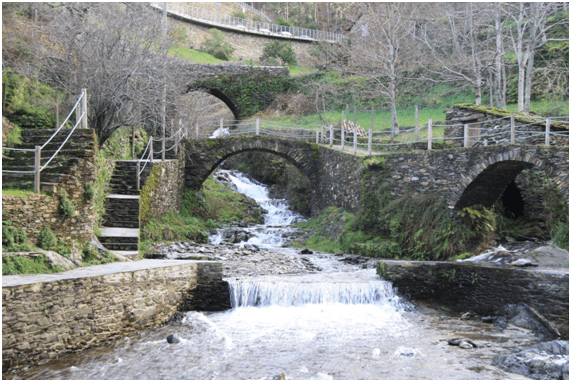 Try some of the local products

If you wish you can also buy some of the regional products and taste them during your picnic. You will find in the stores of the village’s centre: handmade bread, honey, chestnut cakes, local goat cheese, chestnut liquor, as well as handcrafted or other sheepskin products (like a schist miniature of a Piódão’s house). If you prefer to have lunch in a restaurant there is a nice typical one, “O Fontinha”, located in the village’s centre where you can taste the regional food: the Chanfana (roasted sheep or goat meat), grilled trout or pork tripe.

What to visit in Piódão?

The Church of Our Lady of Conception

Besides the very small São Pedro chapel, the Piódão’s parish church is also worth visiting. It has 4 cylindrical shape towers each of them is topped by a cone and was rebuilt in the end of the 19th century. The church’s reconstruction was funded by the local population. The church is consecrated to Our Lady of Conception. Historically, the cult to Our Lady of Conception was very important: she was the patroness of Portugal when the country was ruled by the last Portuguese Royal family, the Bragança, from 1640 until 1910 (/blog/lisbon-and-the-portuguese-monarchy-remembering-the-everyday-life-of-the-last-royal-family). In the interior of the church there is a 16th century Renaissance style altarpiece made of carved gilded wood and topped by the image of Our Lady of Conception. The statues of Saint Michael the Archangel and Saint Sebastian are displayed just next to the altarpiece. 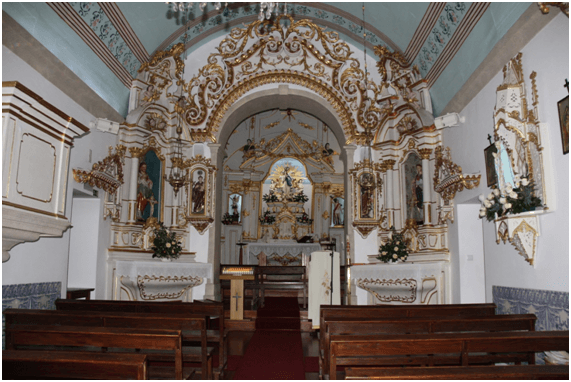 Finally, visit the small Museum of Piódão, located just next to the Tourism office. There you will learn more about the traditions and the way of life of the village’s inhabitants in the past. The Museum is located in front of the Church, in the Cónego Manuel Fernandes Nogueira Square: it takes its name from Manuel Fernandes Nogueira (1861-1944) who was a priest in the Piódão’s parish. He was born in Loriga, a small village in the Estrela Mountain, and lived in Piódão in the beginning of the 20th century. In small villages like this the figure of the priest was very important: it was a very influential person. I hope that you enjoy your time in this fabulous village!