The Regaleira Palace and gardens: one of Sintra’s most exquisite monuments!

If you are staying for a week in Lisbon I strongly recommend that you visit an old mountain town called Sintra! It is a very touristic town with a lot of monuments and ancient royal palaces. If you wish to visit everything then you have to spend at least 2 days in Sintra: and believe me it is totally worth it!

To avoid the crowds of tourists that visit Sintra everyday I advise you to go early in the morning (around 08.30 am) by train: you can leave from the Rossio train station in Lisbon and in approximately 45 minutes you will be in Sintra. Then, you can walk from the train station to the Regaleira Palace: it is a 25 minute walk. On the way to the Palace you will pass by Sintra’s historic centre.

The Regaleira Palace and gardens which nowadays belong to a public Foundation (the Cultursintra Foundation) opens at 09.30 am and the ticket costs 10 euros per person. Presently, to go into the gardens you need to pass by the former stable and buy the ticket in the ticket office which is situated in the former cowshed. I recommend that you first explore the incredible tunnels and grottos of the gardens and only then visit the Palace.

Who was António Carvalho Monteiro? 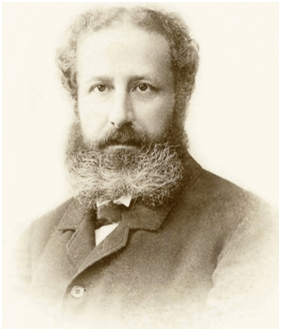 The founder of the Regaleira Palace, António Augusto Carvalho Monteiro, was born in Rio de Janeiro, in Brazil, in 1848, and died in Sintra in 1920. His father, like many Portuguese people, immigrated to Brazil where he was able to make a huge fortune with the trade of diamonds and coffee. Carvalho Monteiro graduated in Law at the University of Coimbra, in Portugal, and inherited his father’s fortune. He became an eccentric and extremely wealthy capitalist who saw in Sintra, like many other upper-class people, a refugee from the Lisbon’s busyness. The mountain’s fresh air, the existence of innumerous water springs and the possibility of hunting deer and boar in the forest have always attracted many rich and noble Portuguese families throughout the centuries, including of course the Portuguese monarchs.

Carvalho Monteiro was a very eclectic person with a vast culture, a deep scientific mind and a profound interest in botany, poetry, fine arts, zoology (namely the study of mollusks), theatre or mineralogy. He was a bibliophile, a collector and a philanthropist. 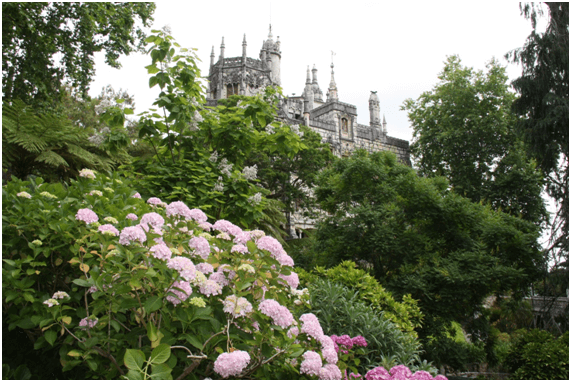 The Belle Époque: a period of great technical changes

This outstanding Palace was built during the period of time that is normally known as the Belle Époque that started in 1890 and ended in 1914 (when the First World War began). It was a very fertile period of time in terms of technical development: automobiles were invented; electric light was used to illuminate the street lamps of many European cities; cinema became popular; telephones and telegraphs started to be used widely by the European population; and iron elevators, electric cable cars and funiculars appeared all over Europe. In 1895 the Lumière brothers invented the first motion-picture camera and projector (it became known as the Cinématographe and arrived at Lisbon in 1907). In 1896, Guglielmo Marconi developed a primary system of wireless telegraphy. In 1903 the Wright brothers built and flew the first motor-operated airplane and in 1904 the first telephone call was made between Lisbon and Porto. All these technological inventions improved the quality of life of a part of the European population and the everyday life’s rhythm became faster. In the turn of the century, velocity was definitely the keyword.

A time of huge social and economical differences

Besides the technological developments caused by the European Industrial Revolution, the Belle Époque was also marked by deep social and economic differences between the rich capitalist families and the poor working classes. Whereas the great majority of the Portuguese people lived under miserable conditions and used donkeys and horses to move from one place to another, the upper class families (and among them the family of the millionaire Carvalho Monteiro) bought French automobiles that reached almost 80 km per hour. At the time only 150 people owned a car in Portugal, which was considered to be a luxury object.

In 1900 the great majority of the Portuguese society was composed by small farmers and peasants who worked and lived under very poor conditions. The Portuguese upper-class families attended theatre plays, opera shows and organize garden parties in their mansions where they were served by 12 to 16 year old waitresses, who came from the countryside to work for the Lisbon’s rich families. Whereas the poor and many times barefooted people lived in houses with no tap water or sewerage system, ate bread, potatoes or vegetables and had fun organizing picnics on Sundays in the Lisbon’s outskirts, the rich families ate meat, fish and sweets, played tennis, went horse riding or hunting or spent one or two months in Sintra in their summer residences.

In 1893, Carvalho Monteiro acquired the Regaleira estate in a public auction. This estate had once belonged to the Viscountess of Regaleira. After rejecting the project of the French architect Henri Lusseau, Carvalho Monteiro got in touch in 1898 with the Italian architect, painter and set designer (of the São Carlos Opera House in Lisbon), Luigi Manini. Manini, who worked at the La Scala Theatre of Milan, lived in Portugal for many years and was also involved in a lot of architectural projects such as the Palace Hotel of Bussaco, a fabulous 5-star Hotel located close to Coimbra, more than 200 km to the north of Lisbon. The Regaleira Palace was his last great commission in Portugal, until his return to Italy in 1912. 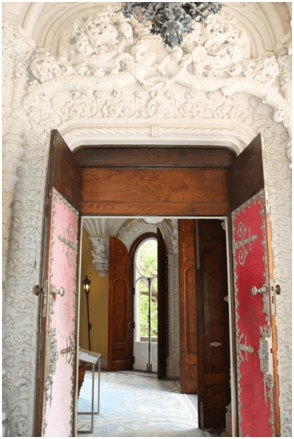 The construction of the Regaleira Palace and gardens began one year later, in 1899, lasted until 1912 and involved some of the best Portuguese sculptors of that time such as: António Gonçalves, João Machado, José da Fonseca, Costa Motta and Júlio da Fonseca. The Palace’s façade was carved in limestone from Ançã, a small village situated close to Coimbra that became famous due to the quality and flexibility of this type of rock. The result was a neo Manueline and Gothic revival style Palace with an exuberant and diverse decoration and fully integrated in the landscape. The neo Manueline art marked the Portuguese architecture in the end of the 19th century: it was based on the art of buildings that were erected during the reign of King Manuel I in Portugal, between 1495 and 1521, like the Convent of Christ (/blog/tomar-and-the-convent-of-christ-an-incredible-journey-through-portuguese-history). This architectural style used naturalistic and fantastic elements such as poppies and artichokes (a symbol of fertility and of hope in resurrection), ropes with knots and buoys of ships (references to the Portuguese Age of Discoveries), seashells and seaweeds (a symbol of the origin of life), oak tree trunks (a sign of perpetuity), heads of lions or frogs (symbols of the animal world), dogs (a symbol of fidelity to a higher principle), lambs (a sign of sacrifice) or pelicans (a symbol of generosity and charity). 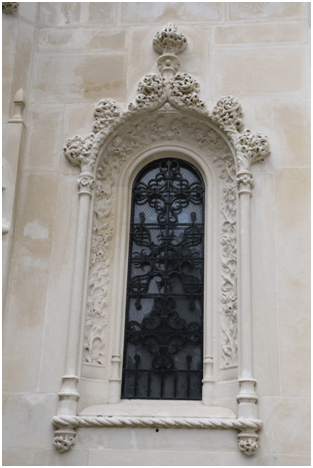 Unfortunately the Palace’s upper floors, where the family’s bedrooms, the study, the drawing room and the laboratory of Carvalho Monteiro were located, are closed for restoration for the last 3 or 4 years. Nobody knows when they will be reopened to the public. The former kitchen, the scullery, the pantry, the refectory and the dormitory of the domestic staff together with the electric generator room are also closed. Currently, you can only visit the rooms of the Palace’s main floor: the most impressive ones are definitely the dining room with its fabulous limestone fireplace; the living room where you can admire the exquisite Italian Renaissance style wood carved ceiling; and the former billiard room where the portraits of 20 Portuguese kings and 4 queens are displayed. 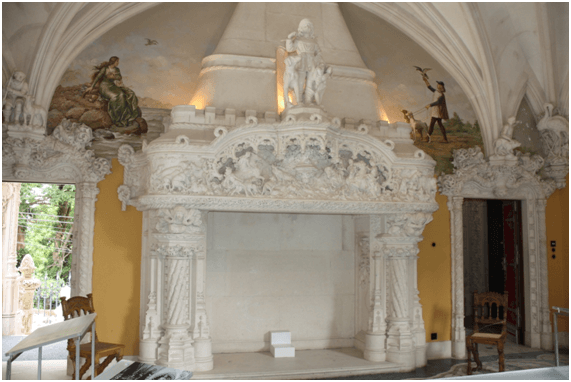 The dining room is the first division that you can visit after having passed by the impressive entrance porch. In the floor you will find a beautiful multicolored Venetian mosaic with the image of a boar. The rooms of the children (Carvalho Monteiro had 2 children from his wife, Perpétua: Pedro Augusto and Maria) were located above this superb dining room. 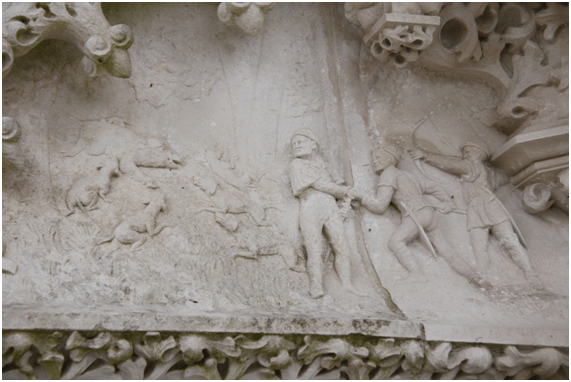 This room is also known as the Hunting Room because of the outstanding limestone fireplace: the fireplace’s mantelpiece depicts extremely well carved hunting scenes. The owner’s last name was Monteiro which in Portuguese means a person that was in charge of organizing the king’s hunting expeditions and that therefore had a profound knowledge of Nature’s animal life. 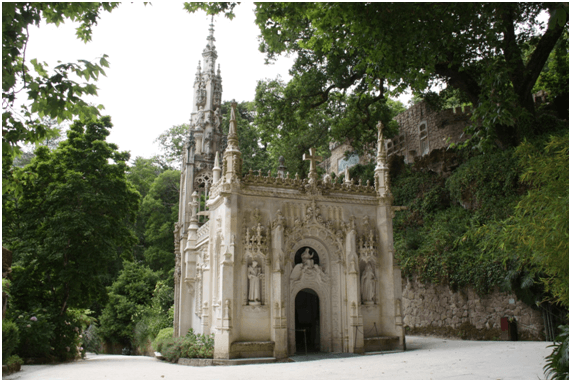 The construction of the chapel was concluded in 1910 according to the project of the architect Manini and was influenced by the Gothic revival style which is present in the building’s verticality (just like the medieval European cathedrals with their towers pointed to heaven), in the scary gargoyles and in the conical pinnacles decorated with plant and vegetal motifs.

Above the main portal you will see sculpted the cross of the Order of Christ, a Portuguese military and religious organization that was founded in 1319 after the suppression of the Knights Templar Order (/blog/tomar-and-the-convent-of-christ-an-incredible-journey-through-portuguese-history). The vigil of Carvalho Monteiro’s body was held here after his death in 1920. 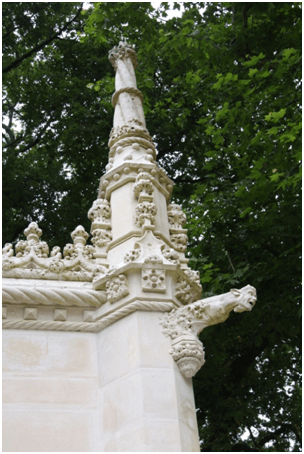 On the left side of the main portal you will find the limestone statue of Saint António (1195-1231) of Lisbon or Padua. He was a Franciscan friar and a preacher who died in Italy, in the city of Padua (where he is nowadays buried) and became the protector of poor children and marriages. Saint António performed many miracles during his life: one of his most famous miracles was when he preached a sermon to the fish in Rimini, an Italian city, because the city’s heretic people did not wish to listen to his message. In Lisbon, Saint António is super famous because many people think that he is the city’s patron saint (which is not true): in fact, the 13th of June, the day of his death, is a public holiday only in Lisbon and in the Lisbon’s county. 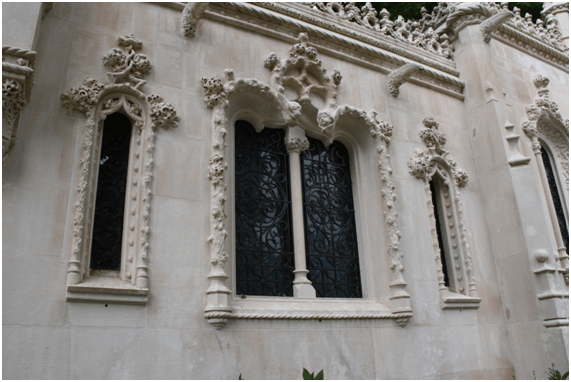 The interior of the chapel 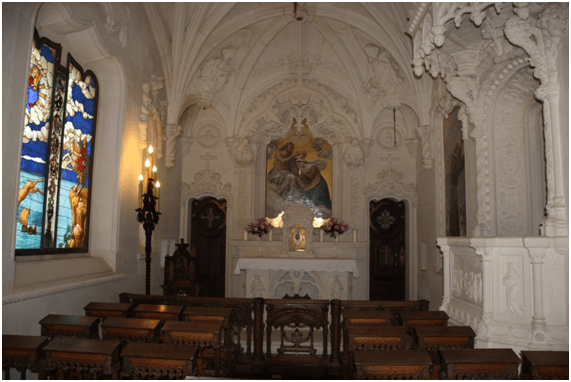 Carvalho Monteiro and his family were very religious. In the interior of this wonderful chapel, on the left hand side, there is a stunning stained glass window that depicts the miracle of Nazaré (a Portuguese village located 100 km to the north of Lisbon). According to the miracle the Holy Mary appeared to a Templar Knight, Dom Fuas Roupinho, when he was hunting a deer: the deer and the horseman went over the cliff but the Christian Knight was miraculously saved by the Virgin. 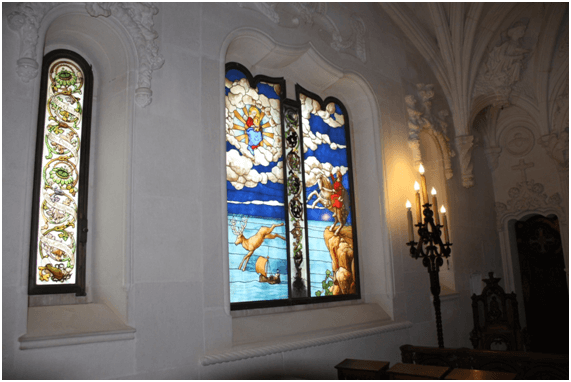 Another highlight of the chapel is the exquisite Venetian multicolored mosaic that decorates the main altar and depicts the coronation of the Holy Mary by Christ with the presence of the Holy Spirit, represented by the white dove. 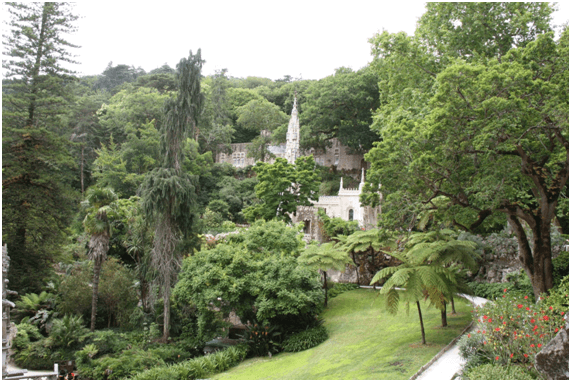 There are several tunnels and grottos to explore (like the Leda’s Grotto) together with waterfalls and lakes. You will also find watchtowers everywhere: go up and enjoy the amazing views to the landscape! 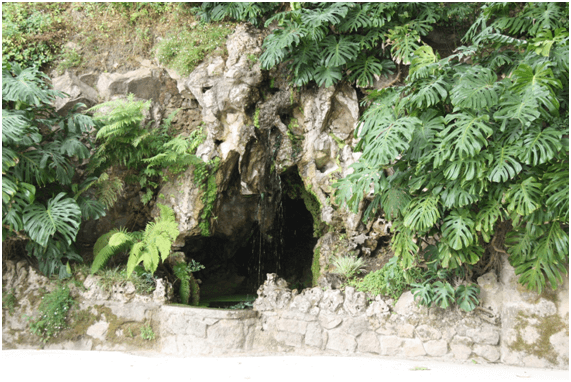 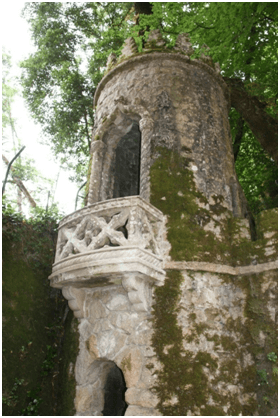 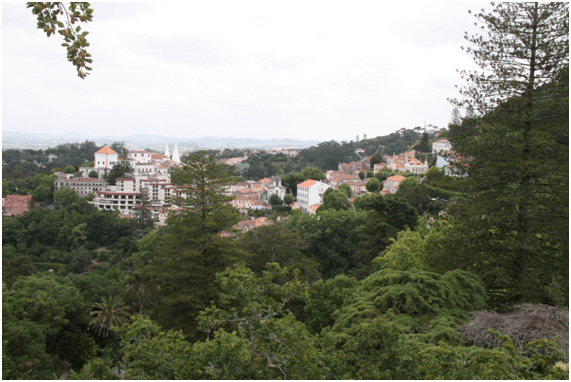 The highlight of the Regaleira gardens is definitely the inverted tower also known as the Initiation Well. Carvalho Monteiro was a very enigmatic and odd person. For example, there was a single gold key that opened the door of the Regaleira Palace, of his permanent residence in Lisbon and of his mausoleum in the Prazeres cemetery.

The Initiation Well is basically a tower that sinks 27 meters into the earth – you can go down through a spiral stairway that encircles the tower. The idea was to go up the 139 steps and make a symbolic journey from the darkness (of the underground) to the light, the knowledge and the truth. A symbolic connection between Earth and Heaven, a spiritual regeneration and an interior change was therefore established. 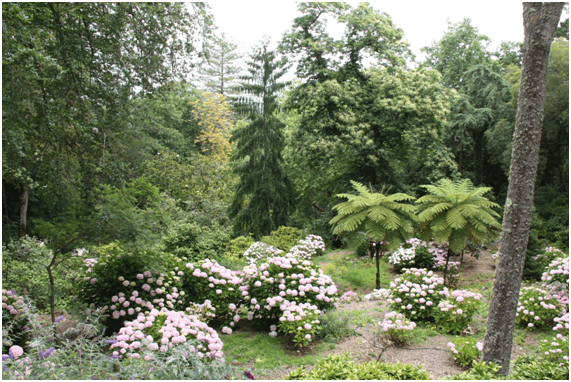 The Promenade of the Gods 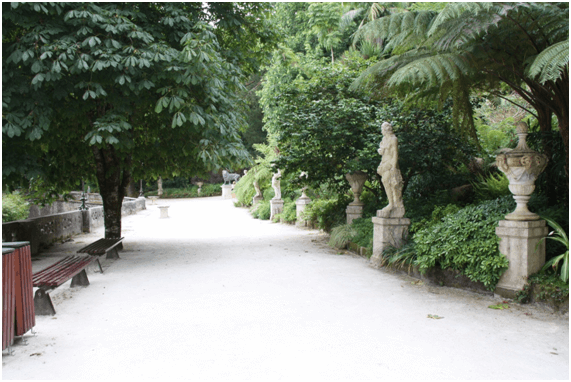 Finally, you cannot leave without visiting the Promenade of the Gods. Carvalho Monteiro was a highly cultivated and eclectic person with a profound admiration for the Roman and Greek Classical mythology. In the gardens there is an alley decorated with marble statues of some classical gods such as: Fortune, Venus (goddess of love), Dionysus (a god related to fertility, vitality and the regeneration of Nature), Vulcan (god of fire and metalworking) or Pan (god of shepherds and animal life). 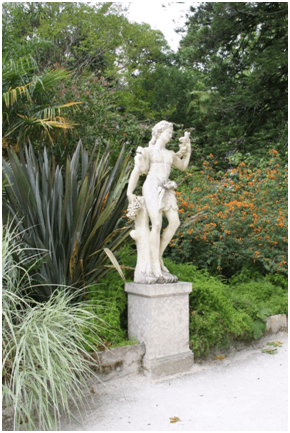 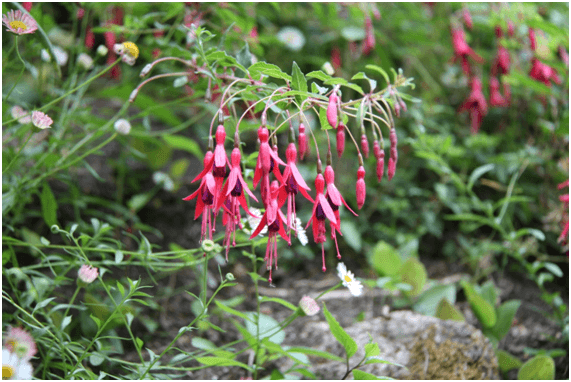 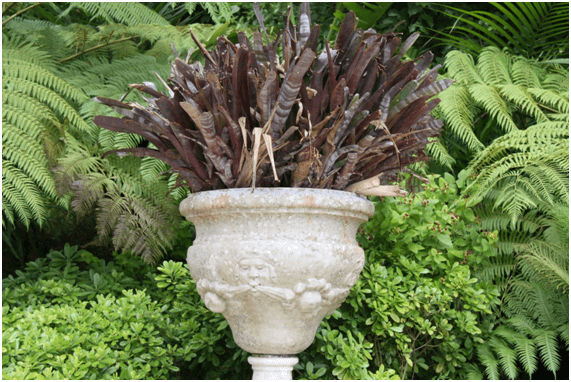