Tomar and the Convent of Christ: an incredible journey through Portuguese history!

There is a marvelous and intricate ensemble of monuments in the centre of Portugal, one hour away from Lisbon that was once the headquarters of the Knights Templar Order in Portugal: the Convent of Christ in Tomar!

The Order of the Temple

The Order of the Temple was founded around the year 1118 after the conquest of Jerusalem during the First Crusade in 1099. Initially, the objective of the Knights Templar was to protect the pilgrims that visited the Holy Land. After 465 years of Muslim domination, Jerusalem became the centre of the Christian world and  a place of pilgrimage for many rich or poor, young or old pilgrims that which to visit the site were Christ had been crucified. However, throughout the centuries this small brotherhood of extremely skillful and disciplined warrior monks received many donations of lands and privileges from many noble and royal European families as a reward for their military aid. Therefore, they became a very powerful and influential organization that possessed innumerous lands, castles, villages, windmills, stores, markets, fortresses and convents all over Europe and in the Middle East. In fact, in the 13th century, they were the main European bankers: they gave significant loans to several European kings, including the French King, Philip IV.

The fall of the Knights Templar in Europe

In the beginning of the 14th century, the French King Philip IV was in huge debt to the Knights Templar Order. Therefore, he initiated a severe, unfair and cruel persecution toward the Templars. In 1307, a lot of of them were tortured, imprisoned and forced to confess the dubious accusations of heretical practices, denial of Christ, financial corruption and even sodomy. The last Grand Master of the Order, Jacques de Molay, together with other Knights Templar, was burned at stake in 1314, in Paris. After this tragic event the order was finally suppressed by order of the Pope that was based in Avignon and had the support and the protection of the French King. The Order’s assets were transferred to the Knights Hospitaller Order that was controlled by the King of France. However, some Knights Templar joined anonymously other military orders.

The Knights Templar is Portugal: the Tomar Castle

In Portugal, the Knights Templar helped the first Portuguese King, Afonso Henriques, during his battles against the Muslims that controlled the South of the country. In 1147 they aided the Portuguese King taking over the city of Santarém. In exchange for their military services they received many lands and the right to build several castles near the Tejo river area such as the Tomar Castle. 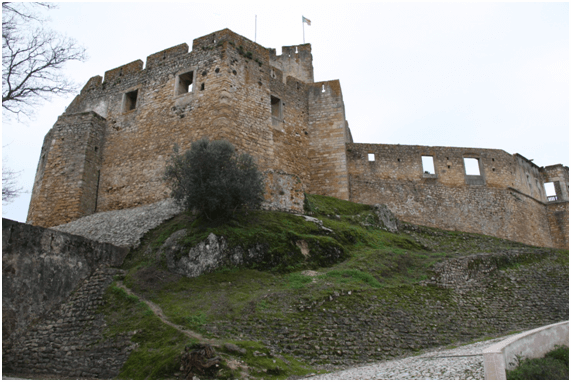 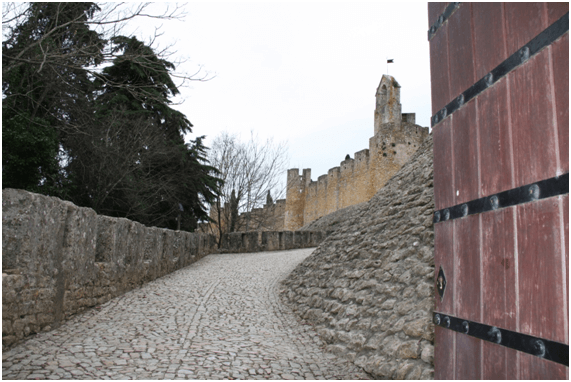 After passing the entrance door you will see on your right hand side the former castle’s keep – this fortified defensive tower was normally the strongest one and the last to fall in case of a siege. On the left side you will pass by the convent’s orchard. At distance you will be able to distinguish clearly the exterior of the Charola, the superb round shaped Templar church! 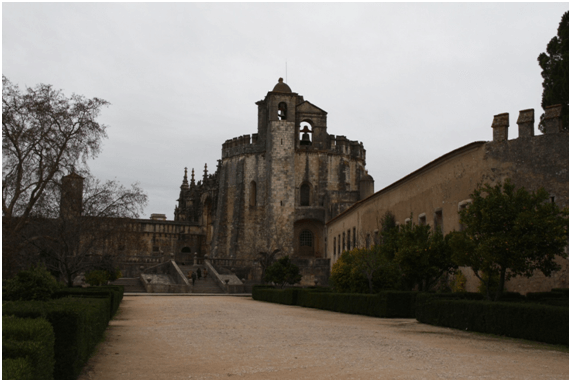 The Charola or Templar Church is definitely one of the highlights! It is an exquisite octagonal-shaped Christian temple that was built between 1160 and 1190! The building was inspired in the Church of the Holy Sepulchre of Jerusalem, where Jesus Christ was supposedly buried after being crucified. 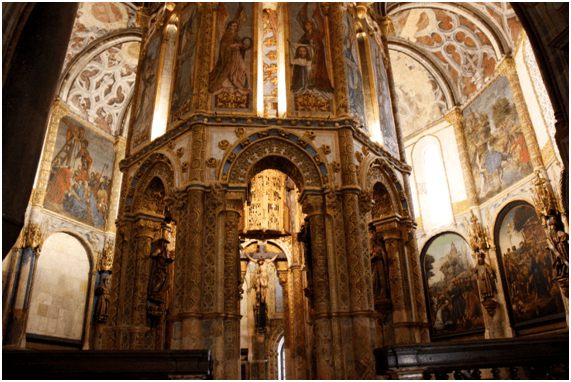 The Knights Templar lived under a very strict discipline: they took the vows of poverty, chastity and obedience to the Pope. Laughing was not allowed as well as any leisure activities. They used to attend mass or pray in silence in the Charola and surely meditated on the sacrifice and on the life example of Jesus Christ. 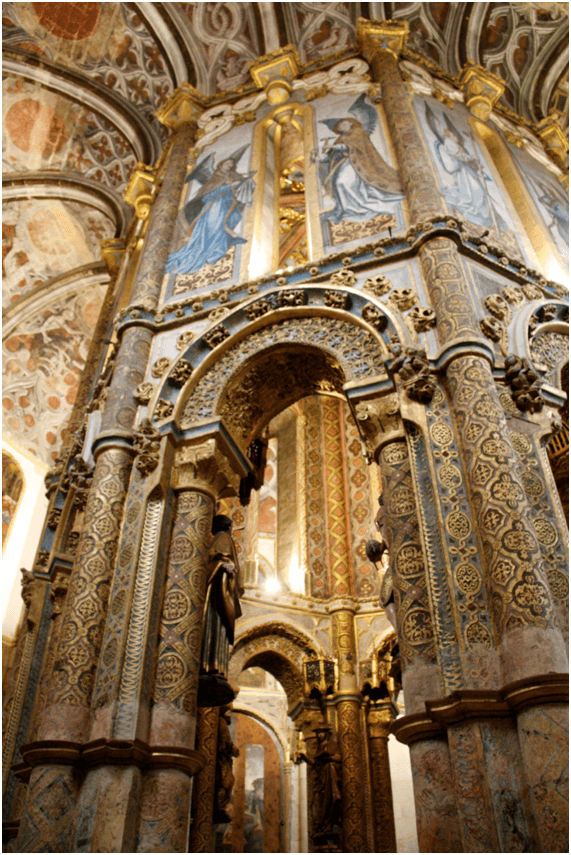 The Byzantine influence of the frescoes of its columns is notorious! Later on, in the beginning of the 16th century, during the reign of the King Manuel I (1495-1521) the Templar church was decorated with Renaissance wall paintings, gilded woodcarvings and wooden sculptures of Saint Jerome, Saint Peter, Saint John the Baptist or Saint Anthony. Some of them were made by the Flemish sculptor Olivier of Gent.

During this time period (1495-1521) a new church portal was built by order of King Manuel I: the South Portal (1515). Juan of Castilho was the architect responsible for this magnificent construction that you can still admire before going into the old Templar church. This remarkable Manueline style doorway is adorned with limestone statues of Our Lady and the Child Jesus placed under a well-elaborated baldachin as well as the sculpted figures of Saint Augustine or Saint Ambrose. The rest of the portal is decorated with some elements proper of the Manueline style (the dominant style during the reign of Manuel I): oak tree trunks, plants, pomegranates, together with angels, semi-humans creatures and medallions with human faces in a perfect symbiosis between the Manueline and Renaissance style. Fabulous! 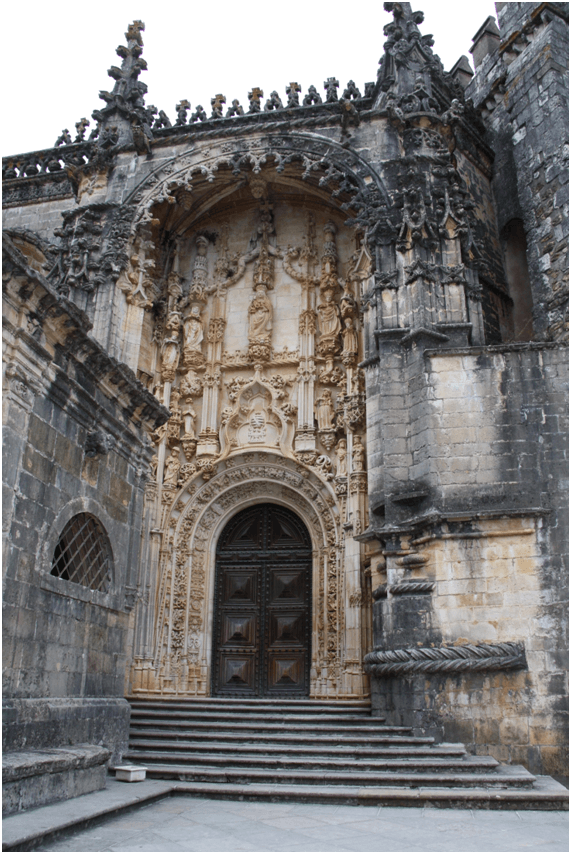 The Convent and the Order of Christ

The monument that we today know as the Convent of Christ is the result of many renovations and changes that took place throughout the centuries. It comprises the old Templar Castle, the Templar Church or Charola, the friars Refectory and the many cloisters that were built and funded by order of the various Portuguese kings. The total area is 45 acres: 5 acres are occupied by the area of the convent and the Castle and the rest by the forest around the buildings. In 1983, this complex of buildings was classified as a UNESCO World Heritage site. 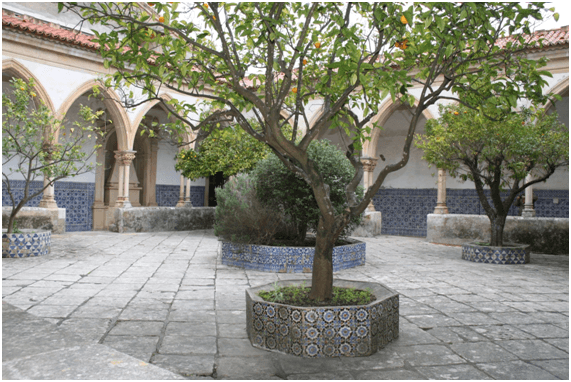 After the suppression of the Knights Templar Order in France, the Portuguese King Dinis (1261-1325) was able to convince the Pope to authorize him to found a new military and religious Order: the Order of Christ. His excuse was that the Portuguese borders needed to be defended from future Muslim attacks. In 1319, King Dinis basically incorporates the former Knights Templar into the new Christ Order together with their assets and patrimony. 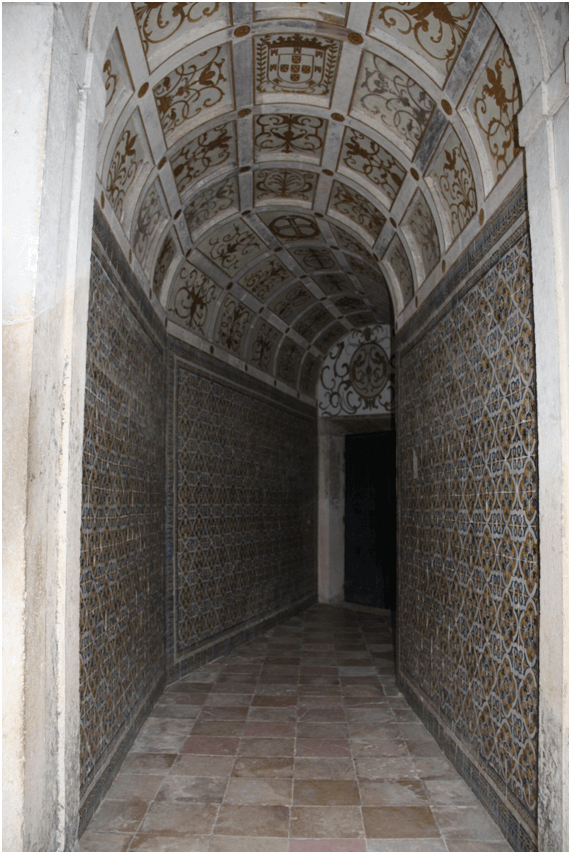 In 1417, Prince Henrique, the son of the King João I, became the Order’s Grand Master and was able to fund many maritime expeditions along the western coast of Africa during the Portuguese Age of Discoveries. Throughout the centuries the Order suffered several reforms (1529) and the Convent undertook many changes with the addition of new wings such as the main Cloister as well as the refectory, the kitchen and the friar’s dormitory (which you can still visit). In its heyday, in the 16th century, the convent hosted 300 people (friars, novices and servants all included). Finally, in 1834, the Portuguese Queen Maria II decides to transform the Order of the Christ into an Honorific Order.

The main Cloister is a true masterpiece of the 16th century Renaissance architecture in Portugal! It is remarkably one of the highlights of this monument! It was built between 1530 and 1562 by several architects such as João of Castilho and Diogo of Torralva and it was inspired by the Italian classical Renaissance style. The European architecture of this time was guided by symmetry, simplicity, functionality and proportionality principles. For instance, there are spiral staircases in each corner to facilitate the access to the cloister’s first floor. 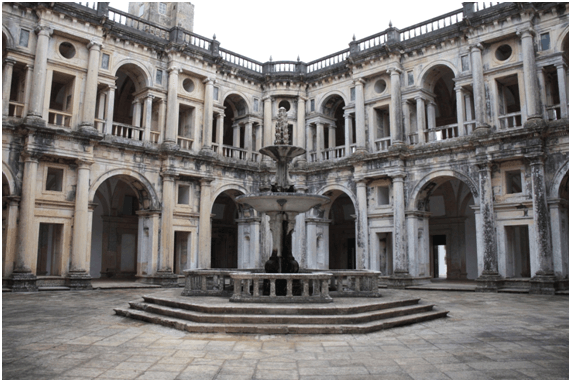 At the center of this elegant cloister there is a beautiful fountain: the water was supplied through a 6 km long aqueduct, the Aqueduct of Pegões, from the outskirts of Tomar.

You cannot leave without seeing the famous Manueline window that is sculpted directly into the western façade of the Templar church. It is a masterpiece of the Manueline style, an artistic movement (the opposite of the Renaissance style) that became very popular during the reign of King Manuel I (1495-1521). It was executed by the Portuguese architect, Diogo de Arruda, between 1510 and 1513.

At the top we can see sculpted the cross of Christ (the emblem of the new Order of Christ) as well as plants, twisted roots, an oak trunk tree, seaweeds, corals, rope knots, buoys and ship chains, the Portuguese Royal Coat of Arms and the armillary sphere (the personal emblem of the power and the wealth of King Manuel I). At the bottom we can see a man’s bust: some say it could be the representation of the architect himself, others say it could be Jesse of Bethlehem, the father of King David and an ancestor of Christ. 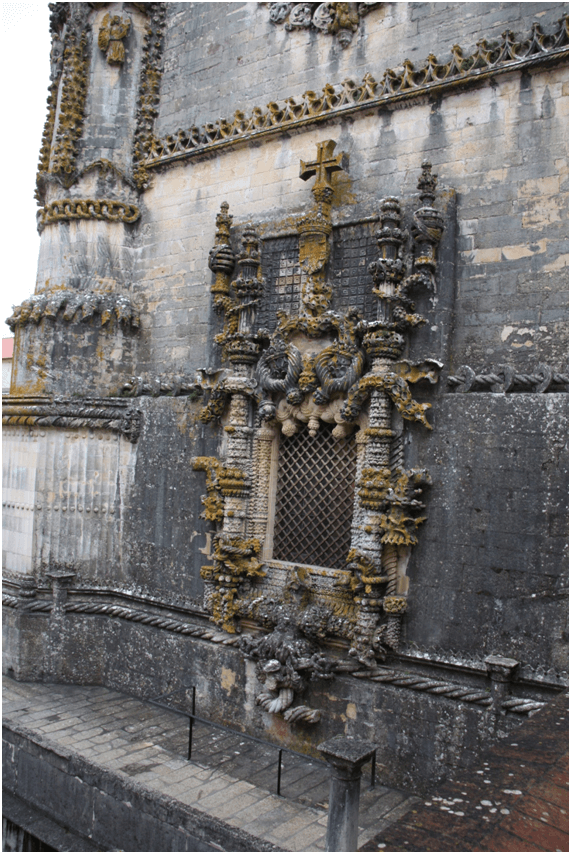 Finally, before leaving you can visit, on the ground floor, the former kitchen, the refectory and admire the various ceramic objects that were used throughout the centuries during the friar’s meals! 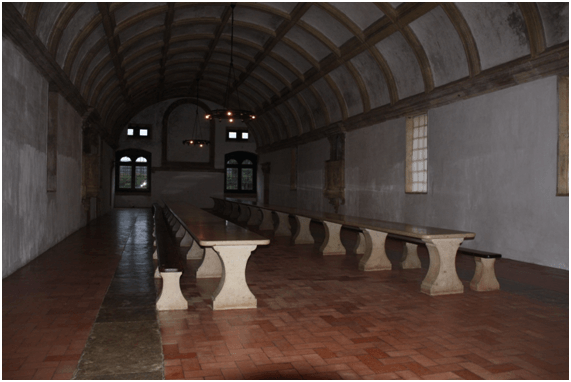 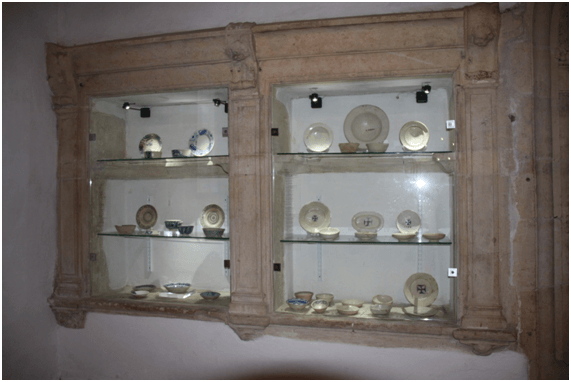 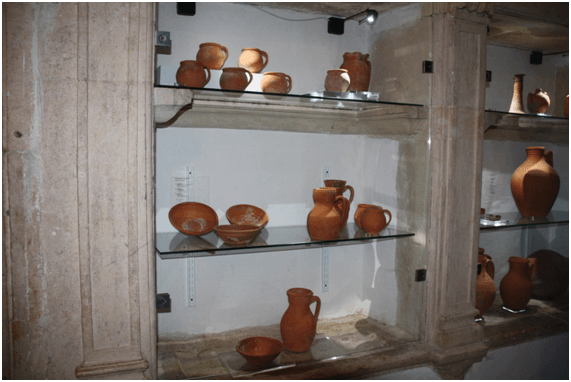 Arouca and the Paiva walkways: in contact with pure Nature!
The Estrela Mountain: going to the highest point of continental Portugal!
Viseu and the Grão Vasco Museum: Portugal’s hidden gems!
Comments