Viseu is a stunning hilltop city located in the region of Beira Alta, between the mountains of Estrela (to the south) and the Paiva river and Arouca (to the north)/blog/arouca-and-the-paiva-walkways-in-contact-with-pure-nature. It is surrounded by the Dão wine region that produces each year delicate and good color red wines and fresh, light and fruity white wines. This charming city of approximately 60 thousand people is still quite unknown to the majority of tourists that visit Portugal every year. 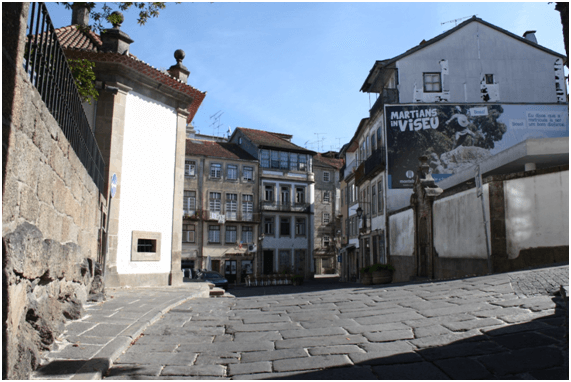 The best option is for you to land in Porto: from there you can easily get to Viseu by car in 1 hour and 30 minutes. There are also buses that leave daily from the Porto Bus Station to Viseu at very reasonable prices (around 12 euros per person). The bus trip takes approximately 1 hour and 45 minutes.

I stayed in a very nice, comfortable, affordable and welcoming guest house situated close to the Rossio square and within a 5-minute walk from the Grão Vasco Museum: the Charme and Alegria Guest House. I strongly recommend it! They even have their own restaurant, which is open to the general public, in the ground floor and is really good! https://www.facebook.com/charme.e.alegria

What to see and do in Viseu? 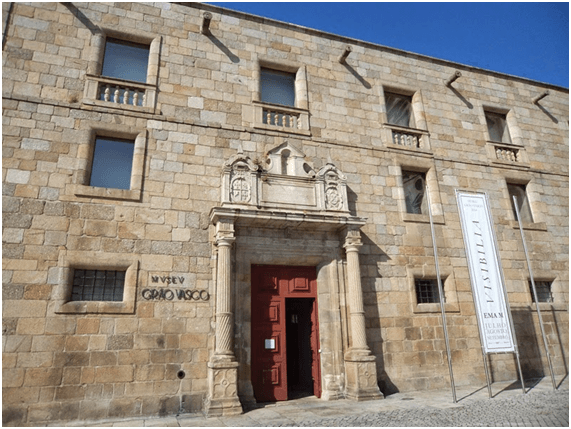 From my travel experience I can say that the smallest and less known museums are often the best ones! The Grão Vasco Museum in Viseu is no exception: it is installed in the former bishop’s Palace, the Paço dos 3 Escalões, a building that was erected between 1593 and 1630. One century later, between 1720 and 1741 the second and last floor was built. Currently, the ticket costs merely 4 euros and the Museum’s collection is quite impressive, namely the Portuguese paintings!

Who was Grão Vasco?

The Museum takes its name from one of the best 16th century Portuguese painters who lived in Viseu: Vasco Fernandes, better known in Portugal as Grão Vasco (in Portuguese the word “Grão” means great). Vasco Fernandes (1475-1542) lived in Viseu for more than 40 years and became famous for producing many religious paintings that nowadays are present in museums, churches and cathedrals of other Portuguese cities such as Lamego or Coimbra.

Many of his paintings were commissioned by D. Miguel da Silva, who was bishop of Viseu between 1525 and 1540 after his return from Rome where he had been ambassador to the court of Pope Leo X (1475-1521). In Rome, D. Miguel da Silva got in touch with great painters such as Raphael or Titian and famous writers like Baldassare Castiglione (author of “The book of the courtier”) and established good relations with very influential Italian families such as the Medici or the Farnese families. When he returned to Portugal, in 1525, he became Bishop of Viseu and was responsible for the introduction of the Italian Renaissance art in this small town.

The Grão Vasco’s paintings: the retable of the Cathedral of Viseu

The highlight of the Museum is undoubtedly the famous retable that was executed by Vasco Fernandes, between 1502 and 1505, and that was used to decorate the main altar of the Cathedral of Viseu. This outstanding work of art was commissioned by the town’s bishops D. Fernando Gonçalves de Miranda (1487-1505) and by his successor D. Diogo Ortiz de Vilhegas (1457-1519). It is composed of 14 oil paintings focused on some of the most famous moments of the life of the Virgin Mary and Jesus Christ such as the Annunciation of Our Lady, the Nativity of Jesus or the Adoration of the Magi (also known as the Adoration of the Three Kings). 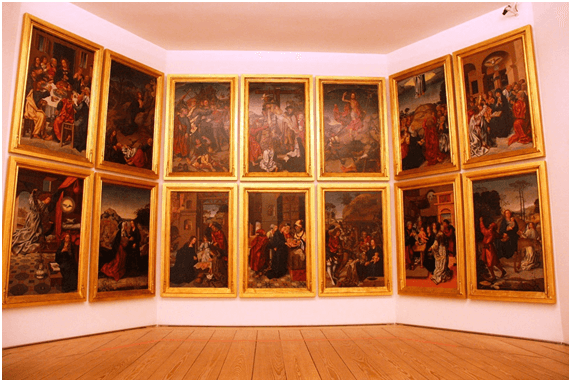 What is remarkable about this last painting, the Adoration of the Magi, is that the painter replaced Balthazar (the black King) by a Brazilian Indian from the Tupinambá tribe. Basically, this is the first pictorial representation of a South American inhabitant in the History of European Art! Unfortunately, this person was probably a slave that arrived to Portugal in the beginning of the 16th century, during the dark period of the Portuguese Colonial Empire. Portugal officially arrived to Brazil in 1500, on April 22, and from this day onwards the Portuguese were responsible for enslaving thousands of Indians that were brought to Portugal or sold to other European countries. 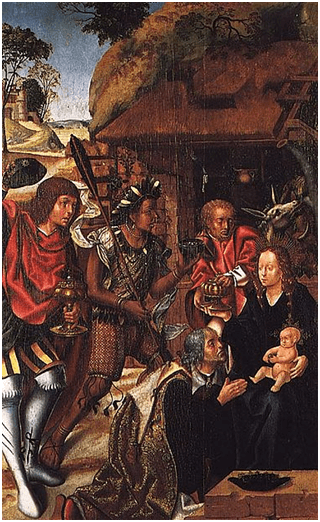 The portrait of Saint Peter

Grão Vasco was also responsible for another work of art that you can admire in the Museum: the portrait of Saint Peter (1530), commissioned by the bishop D. Miguel da Silva to decorate one of the chapels of the Cathedral. In this oil painting, Saint Peter, the first Bishop of Rome, appears dressed with luxurious clothing and seated in an impressive throne made of stone: we can easily notice that the notion of perspective is present, which is a characteristic proper of a Renaissance painting. Whereas the Cathedral’s retable shows some influence from the Flemish paintings that were arriving to Portugal at that time, the Saint Peter was clearly influenced by the Italian Classical Renaissance art. This is unquestionably a masterpiece! 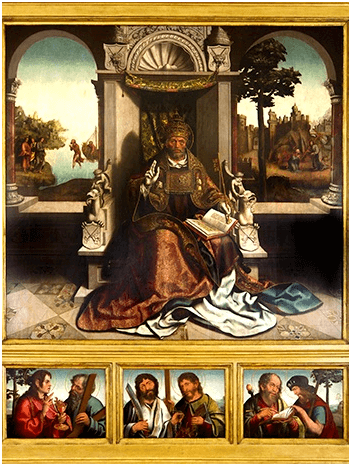 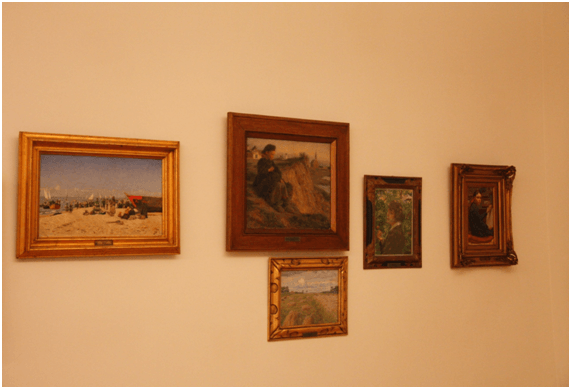 Some of these great Portuguese painters were influenced by artistic movements like Naturalism and their paintings were focused on subjects such as the way of living of peasants or rural and maritime landscapes. This movement was in part a reaction against the poverty of the working classes caused by the 19th century European Industrial Revolution. 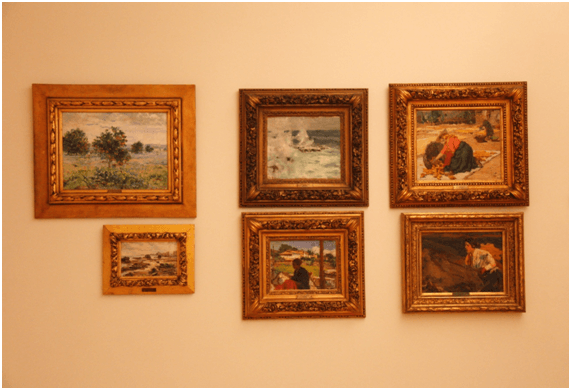 Finally you will also see in the Museum some interesting furniture, wooden sculptures, oriental porcelain and textiles. Some of the textiles came from the Far East: apart from precious stones, spices and exotic cabinets or ivory salt cellars and small coffers, the Portuguese royal and noble families were fascinated by the Indian and Chinese tapestries. These tapestries were seen as luxury objects and were often used to cover the floor, the tables, the chests or were hanged in the walls. 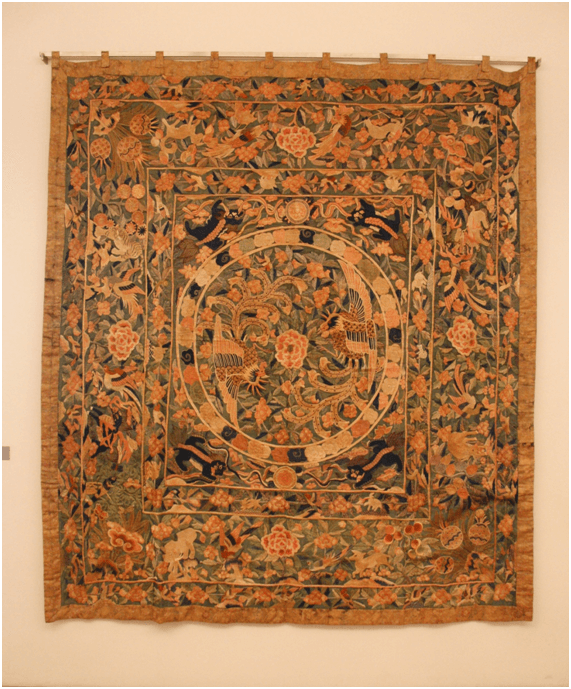 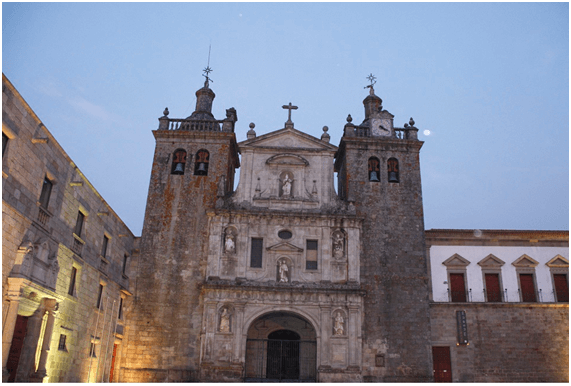 Just next to the Museum you will find the magnificent Cathedral of Viseu: it was originally conceived in the end of the 13th century by the architect Pêro Martins but suffered, like almost any church, many renovations until the 18th century. The main portal, between the two Gothic bell towers, was designed by the Spanish architect Juan Moreno that came from Salamanca, in 1635 (the former portal was damaged by a storm). At the centre we see the statue of Our Lady of Assumption (the patroness of the Cathedral) as well as the statues of the 4 Evangelists (Saint Mark, Saint Luke, Saint John and Saint Matthew) and between them the statue of Saint Teotónio (a Portuguese saint that was in charge of a priory in Viseu between 1112 and 1119).

In the past the Grão Vasco’s paintings, which nowadays are exhibited in the Museum, were used to decorate the walls of the Cathedral. Currently, there are still beautiful 17th and 18th centuries gilded wood side altars that embellish the interior of this superb church. Besides that if you look carefully to the ceiling you will see something completely different: there are ropes with knots that were sculpted in the vaulted stone ceiling! This was probably done by the architect Juan of Castilho in the beginning of the 16th century and it is most likely a reference to the Portuguese Age of Maritime Discoveries. It is a quite unique decoration!

The cloister’s ground floor was built by order of the town’s bishop D. Miguel da Silva between 1529 and 1534: when he came back from Rome he brought with him the Italian architect, Francesco Cremona, who was in charge of building a new Renaissance style cloister. The Ionic capitals of the cloister’s columns follow the rules of the classical Italian art. 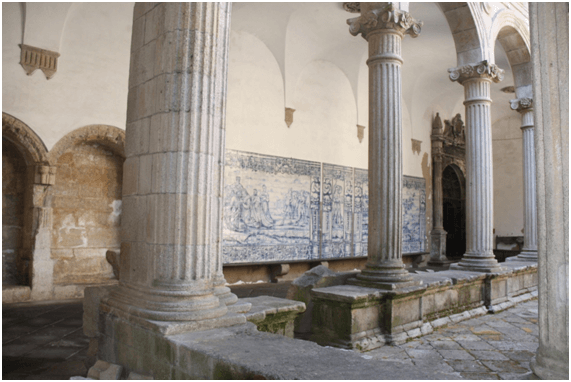 The cloister’s walls are decorated with very beautiful blue and white tiles. In Portugal tile decoration is present in a lot of monuments. In the past they were often used to decorate the interior walls of churches and cathedrals, the gardens of noble palaces and even the façades of buildings. 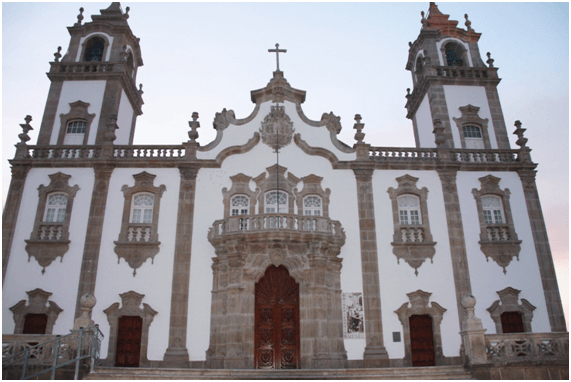 On the opposite side of the Cathedral’s square there is an elegant 18th century Rococo-style church with an imposing façade: the Misericórdia Church! I find the contrast between the granite stone and the white colour façade incredibly glamorous! The symmetry of the two bell towers gives the church a sophisticated aspect. The person responsible for this masterpiece was probably the Portuguese architect António Mendes Coutinho. 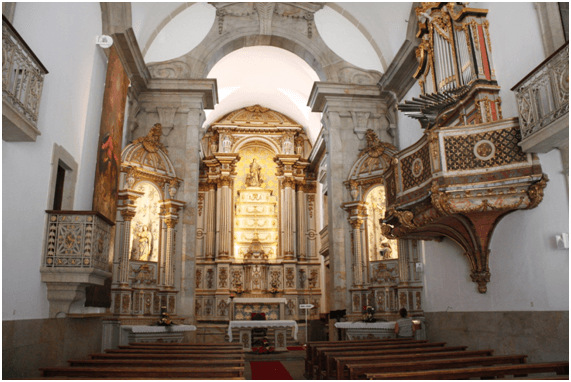 The interior is rather sober and austere, though. There are some nice gilded woodcarvings and there is a precious pipe organ made of wood that is attached to the right wall. On the side altar located to the left we can see the sculpted representation of the Visitation, the biblical moment when the Virgin Mary visited Saint Elisabeth.

4. A walk through the old districts

Finally, after visiting these 3 sites I recommend that you take a walk through the old districts of Viseu and end in the Rossio Square, the city’s main square where the Town Council building is located. Viseu literally breaths history everywhere: nowadays, you can still see the old medieval gateways. In the past there were 7 gateways but today you can only see 2 (the Porta do Soar and the Porta dos Cavaleiros). Besides the Roman colonization, the town was occupied by the Muslims from 711 until 1058 when it was finally retaken by Fernando Magno, the King of Castile and León, and great-grandfather to the first Portuguese Christian King, Afonso Henriques. Some Portuguese historians even believe that our first king was in fact born here, in Viseu, and not in Guimarães like it is commonly accepted by the Portuguese population. It is possible! 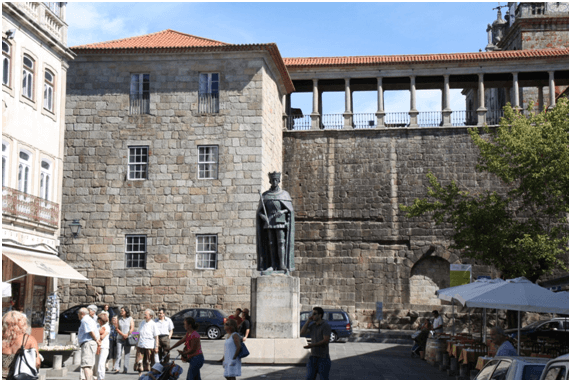 From where you are you can head towards the King Duarte square, which is very close to the Cathedral. There you will see the bronze statue of D. Duarte, who was born and baptized in Viseu, in 1391, and was king of Portugal between 1433 and 1438 when the Portuguese Colonial Empire was being expanded. In and around the square there are several nice restaurants: one of my favorites is definitely “O Cortiço”, located at Rua Augusto Hilário. The red wines from the Dão region go really well with some local dishes such as roasted veal or lamb with potatoes or the traditional chanfana (a dish made from roasted goat meat seasoned with red wine, garlic and bay leaves). If you prefer fish you can ask for a bottle of white wine (Casa de Santar is a good choice) to have with a fried trout from the Paiva river served with cowpeas. 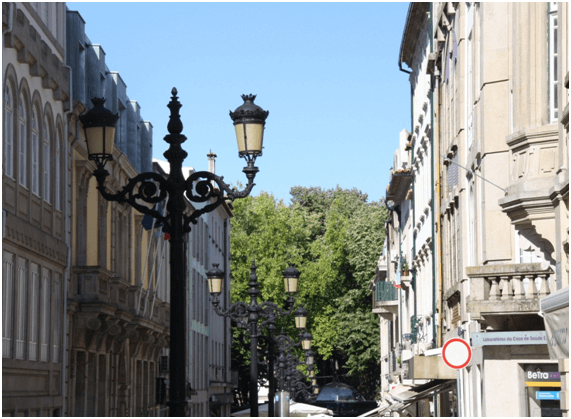 After this, go down the Augusto Hilário Street and turn right when you find the Rua Direita, one of the oldest streets that already existed when Viseu was a Roman city! There you will find several nice gift shops and some pastries shops. When you get to the crossroad with Rua Formosa you have two options: or you turn left and at the end of the street you find the remains of the former Roman wall; or you turn right and you finally get to the República Square, commonly known as the Rossio square. 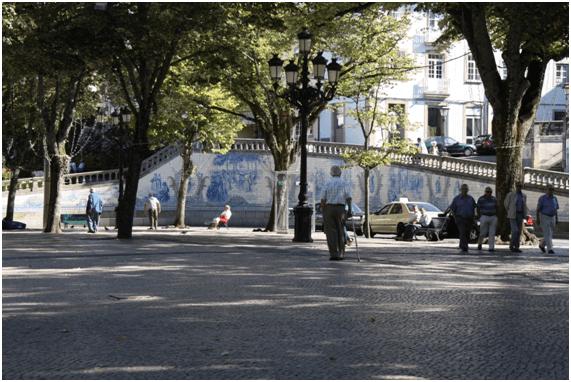 Take your time and have a nice coffee at the café situated in this square. Admire the beautiful linden trees that surround you. Do not forget to see the gorgeous blue and white tile panel, executed by the artist Joaquim Lopes in 1931, which depicts the daily life of the city’s poor people in those times! Finally, I also recommend a walk through the city park situated just next to the Rossio square and named after one of the best Portuguese writers of the 20th century: Aquilino Ribeiro! The park is composed of a great variety of trees and plants such as oaks, holly bushes or laurel and has also some nice lakes! It is a perfect way to end the day in Viseu! 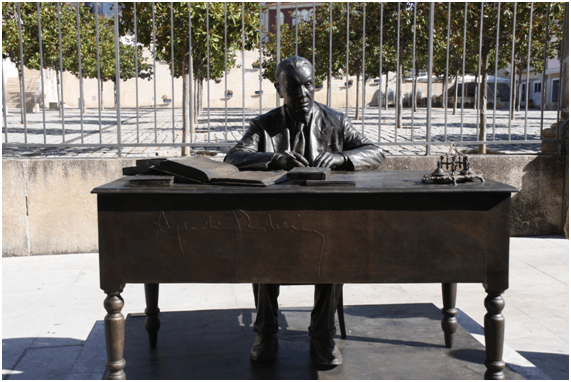